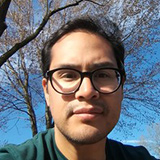 She is a graphic designer. She worked for eight years at Imprenta Madero with Vicente Rojo. She founded Petra Ediciones in Guadalajara in 1990. Since then, she has worked as editor, designer and director of the publishing house. She is the designer of the magazine Luvina. She has won national and international awards and acknowledgments: in 2014 she received the Best Children's Publisher of the Year at the 51st International Children's Book Fair in Bologna, three New Horizon Awards at the Bologna Book Fair, or the award “The Best Books for Children in Spanish” from the Banco del Libro de Venezuela, among others.